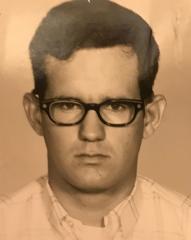 I remember the first time my Dad told me he was adopted. I was not quite old enough or wise enough to really understand what he meant at the time but I was savvy enough to know that being adopted at the age of 13 was somewhat unusual. My grandparents on my Dad’s side were older than my other grandparents but that did not stop them from being amazing. My grandmother taught me how to play the piano, how to appreciate and cook gourmet foods, how to appreciate afternoon tea and fancy china dishes, and much more.

Adoption has shaped my life. I would not have been successful in school and been able to develop a career as a professor, lawyer, and firm administrator without my Dad. He would likely not be the man he is today without his adoptive parents. He was raised by abusive parents who frequently put him on a train between Tarpon Springs and Boston, by himself, because neither of them wanted to parent him. He went from foster homes to The Children’s Home Society in Jacksonville.

That is where his life changed. He met my grandparents. He was adopted at thirteen – with all of the strife that comes with being a teenage boy. He was shown unconditional love and support. He was taught discipline. He was given stability and a place to flourish. He went on to have a successful career in banking and church administration but the thing that is most impressive to me is that he became the greatest Dad in the world.

Despite all of the odds against him, my Dad thrived in his adopted home and was able to take his experiences – good and bad – and use them to shape his life into something wonderful. Adoption changes lives in real ways.

Hancock Law Firm is proud to work with families seeking to adopt children and we know how lucky we are to be a small part of a process that has real power to change lives.

As told by Rachel Bennett, a lawyer who was shaped by adoption.

We can help you immediately.