Why You Have a Right to an Attorney 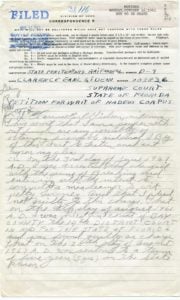 Did you know that prior to 1963 no one had a right to a criminal attorney? Only those who could afford to hire their own criminal defense attorney received representation. Fifty-five years ago this month, Clarence Earl Gideon’s case was decided by the United States Supreme Court. Gideon was accused of a burglary at the Bay Harbor Pool Room near Panama City, Florida. Without counsel, he was tried, convicted, and sentenced to five years in prison.

Gideon had a new trial and was found not guilty of the burglary charge. His case had far-reaching effects. Across the country, the legal community had to figure out a way to abide by the Supreme Court’s ruling in Gideon’s case. In Florida, this led to the development of the Florida Public Defender system, which provides attorney’s counsel to criminal defendants at no cost to them.